SPECIAL THANKS TO NY TAVERNS 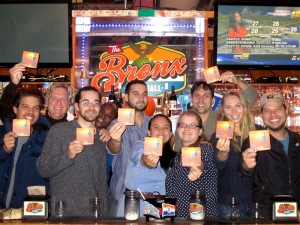 Thank you to our supporters on the east coast working with us to bring Barb’s Beer to NY and Boston. In NY these include the Bronx Beer Hall, BK Sweeney’s Uptown Grille, Trinity, Doc O’Grady’s and Galway Hooker (in Greenwich Village.) We’re grateful to these supporters for hosting “introductions” of Barb’s Beer during 2015. And special thanks to Andy Murphy, owner of the Lost Dog in Dennis on Cape Cod. Andy’s been working with us on a plan to bring Barb’s Beer to the Cape during the summer of 2016 which will create a platform for expanding to Boston as well as NY. More to come, watch for updates!

Members of a highly popular NY band, ‘The Bogmen’, created a song for Barb’s Beer called ‘Racing to the Cure’ (the Barb’s Beer Song). P.J. O’Connor and Brendan and Billy Ryan, took lyrics by Tom Murphy, Barb’s husband, added a warm, inspiring tune and perform the song as, “Friends of Barb.” Preview our Barb’s Beer song below, then download it to support the Barb’s Beer cause!